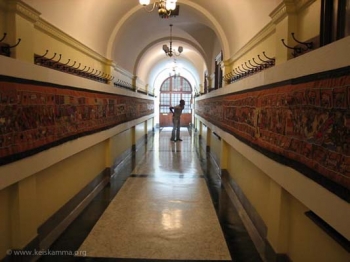 The Keiskamma Art Project is based in Hamburg (which is situated about halfway between Port Alfred and East London on the R72).  It was started in 2000 by Carol Hofmeyr, a medical doctor and fine artist, along with the help of Jan Chalmers (of Oxford, UK) and Jackie Jezewski (of Brantome, France). Carol began teaching arts and crafts to a handful of women who began by collecting the plastic bags that littered the village. They then crocheted these into hats and bags, and from those humble beginnings the Art Project has developed and grown into producing art works of great significance, enabling crafters in their skill to the scale where their work is sold locally and internationally as premium art.  The initial intention was to ensure that Art and Health interject to create meaning and hope to a people who had been struggling from decades of abuse and poverty.

Approximately 130 local African artists and crafters from the Keiskamma/Hamburg area collaborate together to make up the community who create commissioned tapestries and other items for sale.  These can be viewed on their website at www.keiskamma.org/art .   It provides much needed income and a creative outlet for many people of this disadvantaged area.

There are five different specialist art studios (Beading, Felt-making, Embroideries, Ceramics and Print-making), which offer high quality hand-made African crafts and with each item sold, much needed income improves the lives of the locals, and money is ploughed directly back into community upliftment.  The Art Project is administered by twelve local managers and group leaders who help ensure the high quality of the works for sale.
One of the most significant pieces of work to come out of the Keiskamma Art Project is what is known as the Keiskamma Tapestry.  This is an exquisite 120-metre embroidery (made in the same vein as the famous Bayeux Tapestry which is a 70-metre tapestry depicting the Norman Invasion of England in1066), and is found in the entrance to the South African Parliament, winding its way along the wall, reaching through the lobby and wrapping around the exterior of the Chamber.  It was made by over 100 previously unemployed women from the Eastern Cape, and tells of the turbulent history of the Cape Frontier region, from the Stone Age San through the wars and tragedies of the Xhosa people to the peaceful resolution of the 1994 elections.

Created with funding from the Department of Arts and Culture, along with funding from over 100 private donors, it was bought by the Standard Bank for R500 000 and loaned as a long-term exhibit to Parliament.  The site continues…

“The artwork`s presence in Parliament reflects the kinder, more vibrant and open nature of post-apartheid South Africa. Under the old regime, forbidding portraits of the 1961 Cabinet stared down from the walls of the austere lobby - including one of HF Verwoerd, the architect of grand apartheid. Interestingly, Verwoerd features on the tapestry, at the Rand Show in 1961 - the site of the first assassination attempt against him - and right next to an image of Nelson Mandela burning his pass book during the ANC`s 1959 defiance campaign”.

The website lists many other significant art pieces which these crafters have made, and which have travelled internationally (and yes, its a seriously long list – too long to mention here!).  The work that these people have done is truly inspiring but I thought that the Keiskamma Tapestry is of particular importance to us – especially as it started out from humble beginnings in Outreach work, and has gone on to such great heights – empowering individuals to become skilled, and enabling them to earn an income.  The Tapestry is also significant as it tells of our collective history and will no doubt become a heritage piece to be viewed and enjoyed by everyone who sees it for years to come.