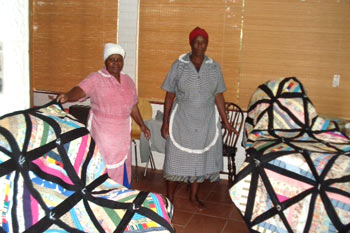 Around the time of the Rainbow Nation`s new beginnings in 1994, and with our country mired down with rampant HIV and Aids, many folk were silently suffering and dying, having been isolated and ostracized due to the stigmatisation of the disease.  Reverend Pam Goodwin of St David’s Anglican Church of the Bushman`s River/Kenton-on-Sea area (in the Eastern Cape) was working in the area, and also ministering in the St Matthew’s Anglican Church of Marselle and Ekuphumleni.  She approached Hennie Delport (the one and only male member of the Dias Quilters Guild who lived in the nearby area), to come and assist her with craft classes for these people to be held at the church.  In the early days, folk came to the church to receive food parcels, but Pam knew that something more fulfilling was required.  Her aim for the group was to provide a centre of friendship and care and to pass on skills to keep the women-folk involved and occupied.  She also wanted in some way to provide them with the potential to earn an income.

Hennie agreed, and started a patchwork group which initially met once a month but due to its popularity, it now meets every first and third Tuesday afternoon of the month, with around 10-15 regular, active members.  Over time it has developed into a “true sanctuary” for these participants where each person experiences a deep sense of belonging and self-worth.

The Dias Quilters Guild of Port Elizabeth assisted Hennie (and continues to do so) by passing on fabric off-cuts and sewing notions for the group.  All the work in the beginning was done by hand and small sewing projects were embarked upon.  However, they are now making large quilts and wall-hangings and have even been given commissioned work.  Their first work to receive public acclaim was showcased at the National Quilt Festival held in Port Elizabeth in 2006, where they won first prize in the Outreach Group category.

All the quilts that these members produce are sold at their local annual exhibition, which is open to the public, and 25% of the profits are ploughed back into the group to stock up on necessary requirements, etc.  Over time the work of the Life Skills Support Group expanded to include other aspects.  It also encompasses educational, sport, and play times with the children of these and other women of the community, and in more recent years they have also established a foster home for abused children in crisis from within the community.   The sewing and quilting skills that these women have acquired has made them feel very proud of their achievements, but they would be the first to say that life is much bigger than that as they have encountered companionship in each other, and experienced mutual love, support and respect.  They themselves have also been able to reach out and beyond their own needs.

A wonderful article highlighting the St David’s Life Skills Support Group project was published in the Threads and Crafts Magazine, No 57, issued in 2006, showing off their award-winning quilt.  There is no doubt in anyone’s mind that the tremendous success of this group is largely due to multi-talented, multi-skilled Hennie who has tirelessly, selflessly and sacrificially invested into the lives of these women over very many years, as well as with the assistance of other long-serving helpers from St David’s Church at Bushman’s River, along with the visionary Revd Pam Goodwin’s faithful input.  We salute them all!