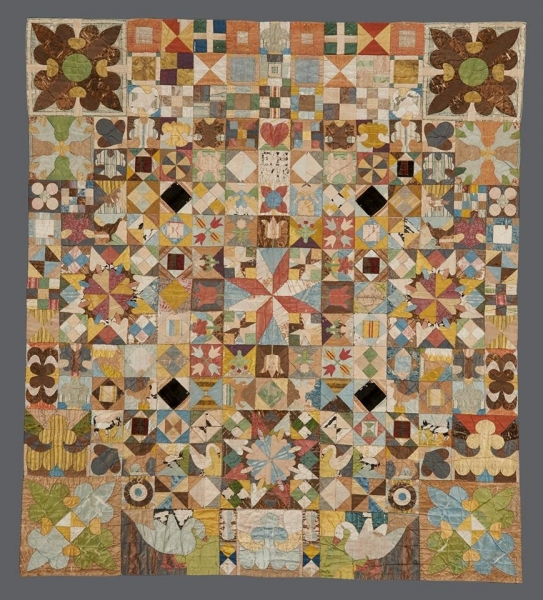 The United Kingdom’s earliest known dated patchwork, the 1718 Silk Coverlet, celebrated its 300th birthday as guest-of-honour at The Festival of Quilts in August 2018 in Birmingham.

The 1718 Silk Coverlet is the most treasured of The Quilters’ Guild Collection. Since the Guild received it in 2000, the piece has been extensively researched, undergoing x-ray analysis to look into its construction, conservation to help ensure its stability and survival, and has also been authentically replicated by members of The Quilters’ Guild.

The Coverlet, constructed in mosaic style, features the initials ’E.H; and has the date ‘1718’ in a central block, which is surrounded by blocks containing both geometric designs and nature motifs which are pieced and appliquéd.

The Coverlet was purchased at auction in 2000, having previously been owned by the Brown family of Aldbourne, Wiltshire. There is no information about the maker, E.H.

In 2018 the 1718 Coverlet was featured as the image of the Birmingham Festival of Quilts and appeared on the tickets as well as the original quilt being carefully displayed.

Amongst the many entries the judges chose as the wining quilt of the challenge, a quilt made by Denise Geach of Melton for her quilt titled ‘Leicestershire 1718’

Karin Huysamer of Cape Town made her replica of the 1718 Coverlet after being inspired by research done in the Quilt History assignment of the SAQG Teacher Accreditation Course. Click the link below to see My 1718 Coverlet: by Karin Huysamer.