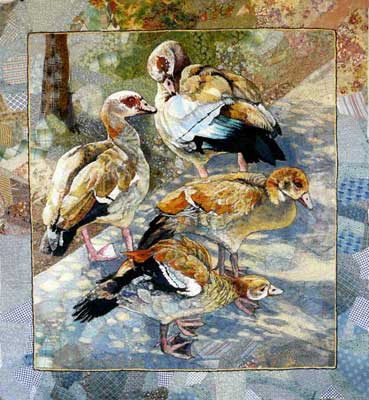 South Africa has taken part annually in the World Quilt Competition since 2001.  Entries from South Africa regularly win prizes in both the Traditional and Innovative categories and have also won prizes for Best Machine Workmanship, Best Hand Workmanship and Best Use of Colour.

See all the 2017 World Quilt Competition winners:  http://www.quiltfest.com/blog/2017-world-quilt-competition-winners/ Also see: http://www.worldquilt.com/ The competition has categories for both Traditional and Innovative quilts with cash awards. The minimum quilt size that can be entered is 8,361 sq. cm’s.

Any South African is welcome to enter a quilt into the World Quilt Competition and can contact the National Competition Coordinator for details:

“Best of Country” is only awarded to quilters whose country has 10 or more quilts entered into the competition.

South Africa: In, Out and Around by Lesley Jurgens

World Innovative:Best Use of Color:  Towards Infinity by Sally Scott

No Best of Country award was given as there were only 5 SA quilts entered and there needs to be 10 minimum.

World Best Use of Colour – Innovative: The Gift of Friendship by Elaine Barnard

World Best Use of Colour – Innovative: Colours of South Africa by Jenny Svensson

Second Prize : Jacobean in the Box  by Marline Turner

World Best Use of Colour – Innovative: Magical Moments in Germany by Mari Claase

PELE-She who shapes the land