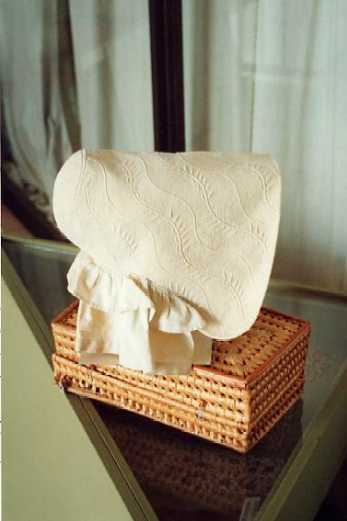 On display at National Museum, Bloemfontein

The white embellished and quilted kappies worn by the South African pioneer women during the pioneer years form one of the highlights of South African Folk art.

The technique used was that of whitework which is an elegant but difficult form of embroidery. Whitework was popular in Europe during the Middle Ages when strict rules made by the church prohobited the use of coloured embroidery on clothing. In the soutern parts of France, Marseilles work and boutis became popular during the 16th C and these items remind one of the work done on the Voortrekker Kappies.

South Africa is a country with an exceptionally warm climate and pioneer women spent most of their time outdoors. They therefore had to protect their faces from the harsh sunlight and the kappies with their wide quilted rims were excellent for this purpose.

The term “Voortrekker kappies” is misleading as many other South African women also wore them even though they were not involved in the Voortrekker movement into the interior. These kappies were commonly worn on farms and it seems that brims were merely folded back when worn indoors. As the patterns on the quilted brims are similar to those worn in the Piedmont area, patterns could have come to South Africa with the Hugenots in 1688

The white kappies had different designs used in different times and cicumstances but all had a neck frill.

There were two main techniques for making the stiff brims: one being reminiscent of Marseilles work and the other, quicker method where a cord was inserted between two layers of fabric with the surrounding fabfric quilted with a filler pattern to ensure a high relief, corded pattern.

Designs included flower and geometric patterns as well as stylized plant and animal designs. The popular heart design was difficult to execute and there seldom used on the brims of the kappies.

The folk art of the SA pioneer women reached its zenith in these exquisitely executed white bonnets and the examples in museums attest to the stylishness, patience and workmanship of their creators.

Kappies made from coloured fabric became popular during the early 19th C and were mostly worn by older women. With the invention of the sewing machine and its appeareance in South Africa, colourful, machine made kappies became the rage and they could by now also be bought ready- made. These kappies were not as elaborately quilted as the white ones.

During the Victorian era, black was the colour of prefereance and more black kappies with their straight lined, corded rims were worn, again especially by the older women

The beautiful Kappie in the photograph is dated 1780. It is quilted with a leaf pattern, cording technique used, made of cotton and completely made by hand. It is an excellent example of the Voortrekker Kappie. It is in a collection at the National Museum in Bloemfontein.